We would like to inform you that KING DIAMOND, which was scheduled to perform at Loud Park on Sunday (October 20, 2013) has canceled their performance due to their equipment not arriving in Japan in time. The band has tried everything within its power to sort the issue out but unfortunately there is no chance of the equipment arriving in time for the show.

We have negotiated with the band about using substitute equipment for the show, but because of their resolute stance on not being able to perform with equipment other than their own has resulted in this cancelation.

We deeply apologize for this situation to anyone who has been looking forward to the band’s performance.
There will be no refunds caused by this cancelation of KING DIAMOND at Loud Park 2013.

Let me try and explain this without saying **** all the time.

The Japanese promoters at Loud Park had, when I woke up this morning, posted a false and deceitful cancellation announcement, which they are going to have to correct to what really happened.

First of all: We did not cancel the show. The promoters did.

Let them show an email saying we cancelled the show. They can’t. We can provide the email in which they cancelled.

They cancelled so late, that some of our people were already in flight to Japan. I myself found out from a forwarded email at 4:26 am Dallas time, waiting for a preordered cab to arrive at 6:00 am to take me to DFW International Airport.

The email had come from Onta (working for the promoter, in what capacity, I don’t know, but at least in a capacity to be able to cancel our performance), saying “Sorry for the result. Please stop taking flights for all…”

So much had happened up to this point, and I will try to condense everything into a short sequence of events.

Entire theatrical production, including all instruments and special effects had been put into the professional care of a Danish shipping company, who is also used by Rocket Cargo among others, in order to make sure everything would be in Tokyo with time to spare. This was trucked from Copenhagen to Hamburg harbor, and loaded onto a Chinese ship.

During the sail from Hamburg to Ningbo, China, where our entire cargo would be in transit and go via Japanese ship to Tokyo, our Danish shipper found out through their agents in China, that the ship’s arrival had suddenly been announced with a 6 day delay. No reasons given.

The Chinese ship company seems to still be working on an answer to our Danish shipper.

With such an unexpected delay (our Danish shipper had never experienced this before), new ways to try and make up for the delay had to be thought out.

A shipping company in China, known to our Danish shipper was contacted, since they were known to have connections to the Chinese government, with the hope that they might be able speed up a procedure that has never been done before. People at Creativeman also brought in connections in China to cooperate with everyone. The new, never before done plan was to now import the entire cargo into China, truck it in China from Ningbo to Shanghai, from where it would be exported and air lifted with a Chinese airline 747 cargo plane (the only one which had large enough entrance) to Narita Airport in Tokyo.

To my knowledge, the Danish embassy and the Japanese embassy in China became involved in trying to solve this dilemma.

At this point, money also became an issue. This procedure would add at least 21,500 Euros to expenses, which was agreed to be split between promoter and band. An amendment to the contract was negotiated, in which promoter in the end agreed to give band half the concert fee, even if the gear didn’t make it. This was agreed to, so that both band and promoter participated in the risk of incurring a bigger loss if we went along with this new plan, and still couldn’t make it.

The following paragraph explains the scenario from which the promoters probably took parts and wrongfully used in their cancellation statement, in order to push the blame onto us, while at the same time practically ridiculing us.

The promoter at some point tried to almost force the band into agreeing to play two free backline shows next year, only paying expenses for flights, rented backline and crew salary, in case the cargo didn’t make it in time to Loud Park, in order to make up for promoter’s part of the possible loss.

However, this idea was quickly scrapped, since we couldn’t guarantee that it would fit in our future schedule, plus that we would have huge losses doing that, and last but not least we do not play without our theatrical production anymore.

Regarding our production, which was originally built over the period of several months and has been expanded since, the promoter generously did offer to try and replicate it in just days, which sounds nice but realistically was nothing but a big pipe dream. There is no way it could have been done safely and respectfully. Everything we use has been cleared with specific safety clauses in mind, and just walking on different feeling stairs that you have not practiced on is an actual safety issue. But there is so much that could be explained here that would make this clear as daylight, but would take too long. I need to get this out now.

Maybe you can get more info regarding all this when Decibel does their cover story of King Diamond very soon.

Again, I want to state that we did not cancel, the promoter did.

We not only have a loss from this financially, we also lost the planned 10 camera filming of our performance for a possible future DVD, plus most important, the chance to show a Japanese audience what a King Diamond show is all about.

EVEN THOUGH WE ARE NOT THE ONES TO BLAME FOR THIS, I WANT TO STATE TO ALL OF YOU HOW SORRY WE ARE THAT THIS WAS NOT POSSIBLE.

I also want to state that the promoters are not to blame for this either. Both parties tried to go above and beyond to make this happen, but in the end it ended up being out of our hands and up to the Chinese customs authorities.

We have emails containing proof of everything I have stated above.

NY VIDEO: The Halo Effect – Feel What I Believe 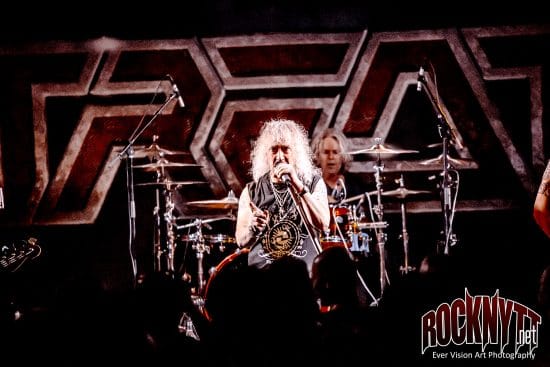 NY VIDEO: The Halo Effect – Feel What I Believe