“Dear Disciples of the Rock,
We hope this finds everyone well. We know we aren’t exactly known for being overly prolific on social media and such, mainly because not everything, every day is deemed newsworthy in our world, but without going overboard there will be days when we just might take things up a notch or two here. Today is one of those days.

So, without further ado, ladies and gentlemen, we are absolutely delighted, over the moon even, to announce that we have signed a deal with Nuclear Blast Records. And that we have just finished the recording of our new album! Our first long player with original songs since “Rock And Roll Is Dead” in 2005 no less. It’s been sent off to the pressing plant and will see the light of day sometime in the first half of next year.

More info on that shortly. We’ll start celebrating this today with our third album “Grande Rock” being available on all digital streaming platforms for the first time in, well, forever. There will of course be a physical re-release in the not too distant future but we’ll get back to you on that. Until then, be safe!” 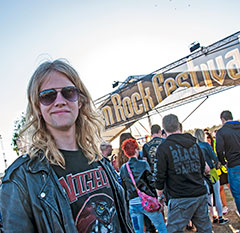