First of all, I would like to welcome you to Sweden and Sweden Rock Festival in June! We are very glad that you want to honor us with a visit.
– Thank you, all the guys are looking forward to the gig…..after so many years, we get to play together again.

It´s been almost 40 years since you last played together, and now you decided to re-unite the original line-up for a few shows, albeit without Peter Hecht and the late Addi Rietenbach. What motivated you to take this step?
– We have been asked so many times about a reunion, but the answer has always been “we should leave the memories. However over the last couple of years a lot of bands have covered some of our earlier work and a few tracks have been used on things like surfboard movies and skateboarding films, that we decided it’s about time we got back out there and did it ourselves….

Unfortunately Peter Hecht decided not to take part as he is quite happy living the quiet life painting and walking his dog 🙂 and of course we respect his wishes. He was a founder member and very much an integral part of LF but in Jogi Wichmann we have a good keyboarder who played on the Sumo Grip album.

New drummer Stephan Eggert is quite a powerhouse and was well known to us through his work with the German band SELIG……so we are all set.

You have incorporated various styles on your albums; dark and heavy rock, progressive rock, melodic rock and even jazz fusion. Which album do you identify the most with today? Is there a certain song that you consider to be the true essence of Lucifer´s Friend?
– Oh that’s a hard one 😉 after listening again to all the albums in putting together the 10 tracks for the “best of” on AWAKENING the new album, I personally have an affinity to all the albums but for different reasons. I think most fans will associate with RIDE THE SKY from the first album and probably that is the true essence of the band, but my personal favorite has to be BANQUET….it was just a pleasure to sing on and very different to everything we had done before.

You just released your latest compilation, Awakening, featuring ten songs from your original studio album. In addition, the album contains four brand new, really great songs that go perfectly along with the classic ones. Did you have a particular record in mind when you wrote them? What was your inspiration?
– Well I hope the fans of the band like the new songs….as with all the LF songs, we never set out in a certain direction, I get the ideas from the [music] the guys sent to me and work from there. Peter Hesslein is the most prolific writer and as always, seems to find the right recipe for me to write the lyrics too. Dieter Horns has presented his ideas on RIDING HIGH and I knew from the first listen it was going to be good before I had even started on the lyrics.

Have you considered making a full length album?
– Yes we have talked about recording a completely new album. I think we needed the kick up the butt to get started. Of course Sweden Rock came along and gave us the start we really needed. It’s not that we have been lazy, I have a lot of material from Peter Hesslein that he has sent to me over the last few months, but not all of it is really LF material.

Of course a lot depends on how AWAKENING is received and whether the fans really want a new album….I certainly hope so…

What significance does the show at Sweden Rock Festival have to you? What is your experience of the Swedish fans?
– Oh great significance…Sweden Rock is one of the best known festivals in the business and we are really grateful to Johannes for approaching us to play there… I have played the festival a few years ago with Ken Hensley ex Uriah Heep and I can truly say it was really well organized and so professionally run.

I have played Sweden many times throughout my career and the Swedish fans have always been great and appreciative …much respect.

What can we expect from the show with Lucifer´s Friend and what are your own expectations of the festival?
– We have a lot of tracks from earlier albums in the live set, songs that we think the fans want to hear live, plus of course the new tracks from AWAKENING.

All in all I think the live set is well balanced and should portray Lucifers Friend the way we want it too….

There are a lot of big names at Sweden Rock some of which are my heroes so I hope I get a chance to catch them live as well…..

Thank you so much for your time. I will see you in June! Any final words to the readers?
– See you in Sweden come along and say Hi and hope you enjoy Lucifers Friend, it’s been a long time coming. 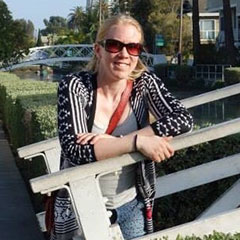